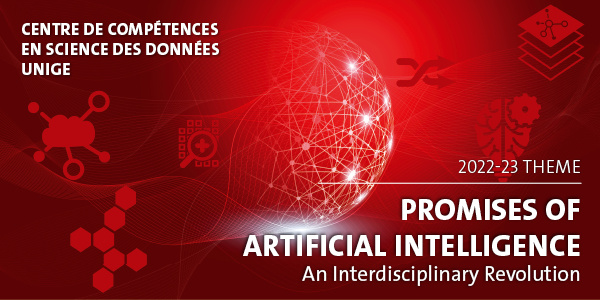 Would you like to present your research at Data Science Day 2022?
Do not hesitate to register to the call for papers/posters >>

The UNIGE Data Science Day is a scientific symposium for researchers at the UNIGE, which takes place at the beginning of the academic year.

Each year, the CCSD aims to stimulate a collective reflection on a particular theme. This reflection is introduced during the UNIGE Data Science Day and continued in the framework of other activities launched by the Center throughout the year. This theme is intended to be precise enough to encourage a significant scientific contribution and a rich dialogue, but also transversal enough to allow for interdisciplinarity.

For its 2021-22 edition, the theme of Data Science Day is "Promises of Artificial Intelligence: An Interdisciplinary Revolution".

Artificial intelligence (AI) is synonymous with the greatest promises and the greatest challenges for humanity. A constant object of imagination and fantasy, AI featured in many popular works long before it became a reality, works projecting dystopian and utopian futures of what could become a world governed by a superior intelligence that would exceed the capabilities of its creator. Today, AI has left the realm of mere intellectual projection to become an integral part of our digital landscape. There are traces of it everywhere: in the algorithm of an online shopping website, in facial recognition applications, or even behind a comment on a social network. Continuous rise in computing power combined with a considerable increase in the amount of computer data now available is what has made this transformation possible, by offering the capacity to train computers to learn and thus to develop an intelligence of their own. In the sciences, these new capabilities offer so many possibilities for rapid exploration and data processing that they can be seen as a truly promising revolution.

For this third edition of the UNIGE Data Science Day, the Data Science Competence Centre of the University of Geneva (CCSD) invites researchers from the University of Geneva to take part in an interdisciplinary study day on artificial intelligence and its various scientific applications. This meeting will be held on 15 September 2022 at Uni Mail. In order to embrace the diversity of the work carried out at the UNIGE on this theme, this day will be articulated around three dimensions of AI:

- AI and the fundamental knowledge on which its development is based,

- AI as an applied tool in the context of a growing number of research projects, and

- AI as a research object in itself, which must be approached in a critical manner.

Within the first dimension, the CCSD would like to invite UNIGE researchers working on the development of AI at a fundamental level to present their work. Whether it focuses on the creation of artificial intelligence architectures, the improvement of machine learning algorithms or the improvement of the technical tools used, all research on this topic (in particular in computer sciences and statistical sciences) is welcome. For the second dimension, the CCSD invites UNIGE researchers to present the multiple applications of artificial intelligence in the framework of their research, regarding the use of image, text, sound or graph processing techniques for classification, categorization or prediction. Finally, the third dimension is open to researchers working to better understand the social, political, economic, legal and ethical implications of the advent of AI and its growing use in society and in scientific circles.

Following the study day on 15 September 2022, the CCSD and the Scientific Computing Support (SciCoS) will launch a joint call for projects for an impulse fund awarding a one-year grant of CHF 25,000 to the best interdisciplinary project on the topic of AI.